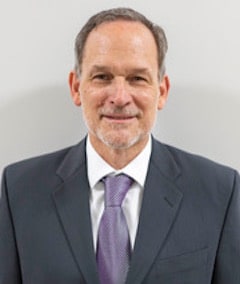 Before joining the firm, Robert spent over two decades protecting the incomes and assets of low-income people in Maryland and Florida. While working at various legal aid programs, Robert handled Bankruptcy and debt defense cases in order to stop the repossession of clients’ cars and homes, as well as stopping wage and bank account garnishments.

In addition, he was the Ryan White attorney at Jacksonville Area Legal Aid, where he represented persons with AIDS and HIV in many types of cases, including Social Security Disability, Guardianship, Discrimination and Domestic Relations.

Robert’s cases and clients have been featured in major news sources, including the Wall Street Journal, NBC Nightly News, USA Today and Forbes Magazine. His passion for helping disadvantaged people against better-funded adversaries has earned him a reputation as someone who levels the playing field for people facing difficult life situations.

One representative client was an 80-year-old widow in St. Augustine, Fla., whom debt collectors harassed so aggressively that she was having heart problems, over which she had to see a doctor. With Robert’s help, she filed Bankruptcy, and got rid of her stress.

Now that he is in private practice, Robert represents clients across the financial spectrum; they all have the same protections under the law and Robert will make sure that you are aware of all the protections available to you.

Laudenslager v. Saia (In re Laudenslager), 2014 Bankr. LEXIS 4782
We filed a Chapter 7 bankruptcy for the debtor and a creditor sued him in an adversary proceeding to force him to honor a pre-petition real estate deal and pay the creditor money. The judge ruled in his favor so and allowed him out of the contract.

Pro bono spotlight: How one attorney helped client get her driver's license back
Robert was featured in an article for helping a disabled person file bankrutpcy in order to reinstate her driver’s license so that she could attend college.

Attending Lucero concerts all over the eastern half of the country

Running a Facebook group for Bankrutpcy lawyers with 1,600 members

Get your Free Book
Client Reviews
★★★★★
"As a real estate agent, I have been involved with many property transactions where I needed a probate attorney to help facilitate the transaction. I have used the services of Mr. Goldman and his staff over the last several years and continue to use them on a regular basis. His office has been able to navigate the court system and help estates sell their property quickly and efficiently..." Michael Starling
★★★★★
"I've had Mr. Goldman do my entire estate planning as well as my gun trust. I highly recommend him and his firm. If you're planning a gun trust, trust no one else Mr. Goldman is one of if not the best versed on this topic." Howard
★★★★★
“Attorney Robert Wilbert of David M Goldman, PLLC, will be the first and only attorney I would ever recommend to a consumer in my position. Mr. Wilbert was professional, answered my numerous questions without hesitation, provided straightforward answers and options. He explained the process thoroughly. He was available to assist before and after the process to make sure all issues had been resolved…” Kameron Knowlton
★★★★★
“Great service is an understatement. We bought several properties that Mr. Goldman handled for his clients. The communication and explanation of everything was terrific. I would definitely recommend him for all of your real estate needs.” Kassandra
★★★★★
“After struggling with 2 probate cases prior to hiring attorney Goldman I was extremely apprehensive during the hiring phase. Not only did Attorney Goldman assure me they could take care of this his office was wonderful. Jennifer was assigned to my case and she was wonderful and were able to guide another probate case I had saving me additional time and frustration. Highly recommend this office.” Debbie
View More
Submit a Law Firm Client Review